“This is my third T’au Empire army,” says Dan. “I started collecting them the first time around 2010 and was inspired by an unlikely source – the blue and purple colours of a Warhammer Storm of Magic gaming board. I liked the idea and wanted to match it up with a D’yanoi Sept army.”

“I created the second incarnation of my T’au Empire army around five years ago and have used it for many games. I like to think I’ve improved a lot as a painter in the years since then, though, so I wanted to bring my collection up to date with this third version of my D’yanoi Hunter Cadre.”

“The army is just the models I wanted to paint – I’m not too fussed about how competitive it is. I also tried to include a good spread of model sizes in the army – the Stormsurge, the Riptide, the Battlesuits and then the Fire caste infantry at the far end of the scale. You do need those little guys in there – they really show off just how big the Stormsurge and Riptide are.”

“The scenery was inspired by (and uses parts from) the Tidewall Shieldline – I wanted to give the T’au their own equivalent of crates and fuel drums, as well as their own Imperial Bastion counterpart. All of these were built using spare bits I had kicking around from years of collecting.”

“When I came to build the tile, I wanted to keep it quite simple,” says Dan. “It’s just a Realm of Battle tile with nothing too fancy done to it. All the terrain features are removable for storage, which is handy as I want to use the tile as part of a gaming table – at some point in the future I’ll have to get around to painting the other five tiles so I’ve something else to play games of Warhammer 40,000 on.”

“With this colour scheme, I pictured the army operating on a night world,” says Dan. “In my head, they’ve some form of infrared stealth system worked into their wargear that makes them almost impossible to see in the gloom. Much of the army, like the Strike Teams and Breachers, had a rather simple paint scheme – just one that’s time consuming. The edge highlights really defined the shape of the models, so I had to get them right – so, understandably, each one took a lot longer than it might otherwise do. On the other hand, they’ve turned out great, so I think it was time well spent.”

“The Stealth Suits and Ghostkeel were dead easy to paint – their stealth panels are just a Chaos Black undercoat, highlighted with Fenrisian Grey and Blue Horror, then given two glazes of Guilliman Blue. That’s all there is to it.”

“The idea of incidental terrain was inspired by the Munitorum Armoured Containers,” says Dan. “T’au aren’t going to be using those, though, so I had to make my own. The basis for the crates, water tanks and atmospheric convertors was just lengths of plastic pipe. I then dipped into my bits box and used spare T’au Empire weapons, drones and turrets to make them look suitably T’au-like.” 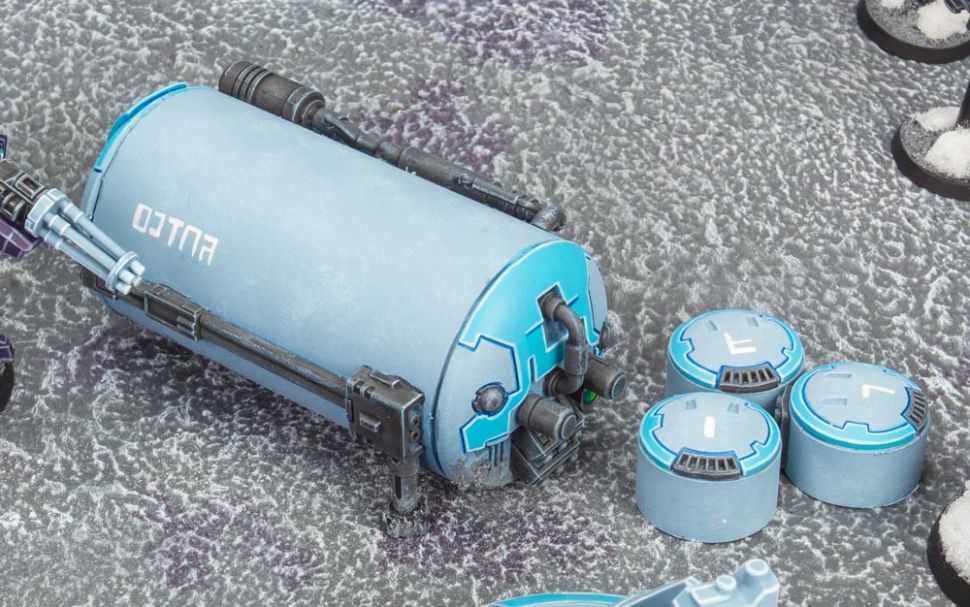 “I really like the Tidewall, but I wanted something more like a Bastion,” says Dan. “This led to the tower, which is deployed from orbit and anchored to the ground with the support struts. The struts were inspired by the anchors on the KV128 Stormsurge’s legs.”

“The Stormsurge and the Riptide were the test models for the army,” says Dan. “It sounds crazy using huge models like that as test pieces, but I needed to know the scheme would work on the big kits before trying it out on the small ones – and the Stormsurge is a great model.”