“I’ve always been a fan of all things Aeldari,” says Luke. “In fact, one of my first armies I collected was a Craftworlds force, but for the longest time I’d not painted any. When the Triumvirate of Ynnead came out, I was slowly drawn back to them – Armies on Parade seemed like the perfect excuse to return to the Aeldari.

“I wanted to focus the army around models I love, or models that had been released since I’d finished my force of old – so that meant the plastic Dire Avengers, plastic Wraithguard, tthe Windriders and, of course, the Visarch and Yvraine. If I’m entirely honest with myself, the whole of the project was a clever excuse to paint those two miniatures.”

Luke had 13 weeks to complete the project, from start to finish, and started by plotting his time out in meticulous detail. But plans don’t always survive contact with the enemy. “I did stick to it for the first few weeks but the scale of what I wanted to achieve meant I ended up working right up until 2am on the deadline day. But that structure gave me the focus I needed – I’m normally a bit of a hobby butterfly, but now I have a whole army.”

“The red that’s on most of the models in the army actually began with a purple basecoat,“ says Luke. “I used an airbrush to build up the red layers, starting with the darker reds and ending with Evil Sunz Scarlet, then shaded it with Druchii Violet, before highlighting it back up to that bright red. It gives the models a weird iridescence, like you’d find on a beetle’s carapace, which I’m really happy with.” 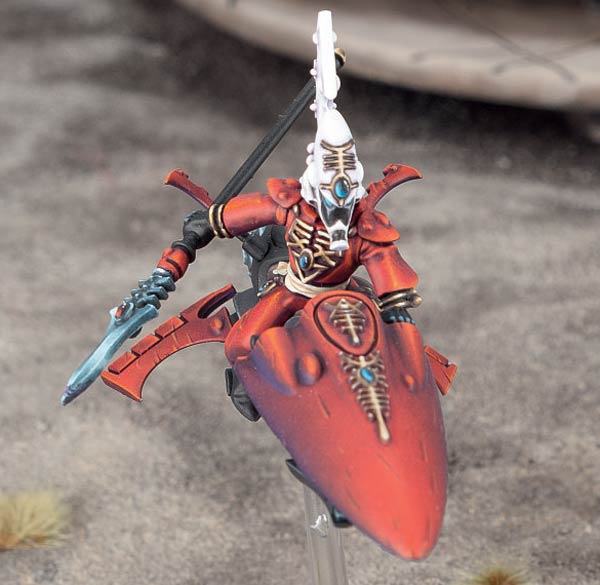 “I based a lot of the army’s colour schemes off those found in The Gathering Storm: Fracture of Biel-Tan,” says Luke. “Much of the army is in the red and white of Yvraine’s vanguard as shown, but I wanted the Dire Avengers to keep their classic blue-and-white colour scheme – their allegiance to the Aeldari God of the Dead is shown through the red crests on their helms.”

The Sword of Ynnead
“The Visarch is such a great model,” says Luke. “I’d have painted him no matter what, but Armies on Parade was a great excuse to finally get around to working on him. There’s just so much brilliant detail on him, it’s a painter’s dream of a model, and was so much fun to paint up.”

“The designs on the tabards and the panels of the models were based on the Ynnari symbols in Fracture of Biel-Tan,” says Luke. “I spent a while practising them, until I was finally happy with my work, and then set about adding them to models where appropriate – it was an easy way to tie the army together.”

Realms of the Aeldari

“The board itself was based on one of the Realm of Battle tiles, but built up with foam,” says Luke. “I drew a huge amount of inspiration from the old Imperial Armour Model Masterclass Volume 1 book for how to build it, as I’d never actually made a board before. The Aeldari ruins are a custom design, which I ended up painting first, then attached to the board tile before carefully blending it into the board with texture paints.”

“Yvraine is such a spectacular model,” says Luke. “Going into the project, I was most excited about painting the Visarch, but once I’d started on Yvraine she was an absolute blast to paint – the model is absolutely covered with wonderful, complex detail that I really enjoyed working on. Her gyrinx is a great touch, too. All in all, it’s a beautiful model and I’m really happy with how it turned out.”