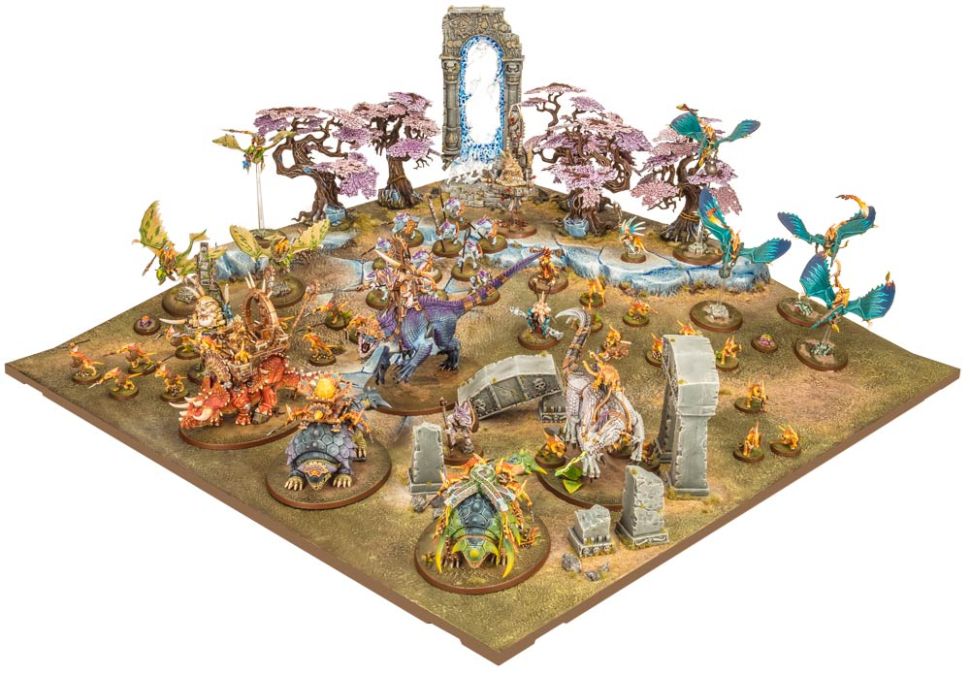 Armies on Parade can seem like a daunting challenge if you haven’t attempted it before, and Mel was unsure she’d have the time. So, as a way of joining in, Mel decided to produce this display board for her existing Seraphon army.

“I really like the Seraphon. To me, they are in a lot of ways the ultimate good guys in the Age of Sigmar. They’re beings made of the stuff of Order itself. As I already had the army built and painted, the first thought for the board was that it needed to match the army’s bases, so that meant a grassy area and bright colours. I went through the terrain range and found some of my favourite pieces of terrain to use, like the Citadel Wood, the Arcane Ruins and a Baleful Realmgate – it wouldn’t be a Warhammer Age of Sigmar board without one.”

“Alongside the natural colours on the board, as you get closer to the Realmgate I wanted to have a ‘magical’ palette – as if the landscape had been absorbing all the magic of the Realmgate. That led to the blue rocks and the glow in the trees. The board was a labour of lunchtimes, so it didn’t take a lot of time to complete. Next year though, I might look at tackling a new army into the bargain, too. Maybe.”

“I really like the Bastiladon,” says Mel. “I’m especially fond of the Ark of Sotek – Tide of Snakes is far too much fun not to use, as who doesn’t like a swarm of biting, magical star-snakes going after their enemies? The Bastiladon itself was a lovely model to paint as well – there’s a great contrast of textures between the scales on the underbody, the gnarled shell and the Skinks manning (or should that be “Seraphoning”?) the Ark of Sotek on its back.”

“In my mind, the Seraphon have returned to the region after centuries, or maybe even millennia,” says Mel. “I wanted to show a bit of the passage of time on this board with the addition of the Arcane Ruins. What might have been a great shrine is now just tumbledown ruins in the wilderness. I added some Middenland Tufts to the ruins to show their age.” 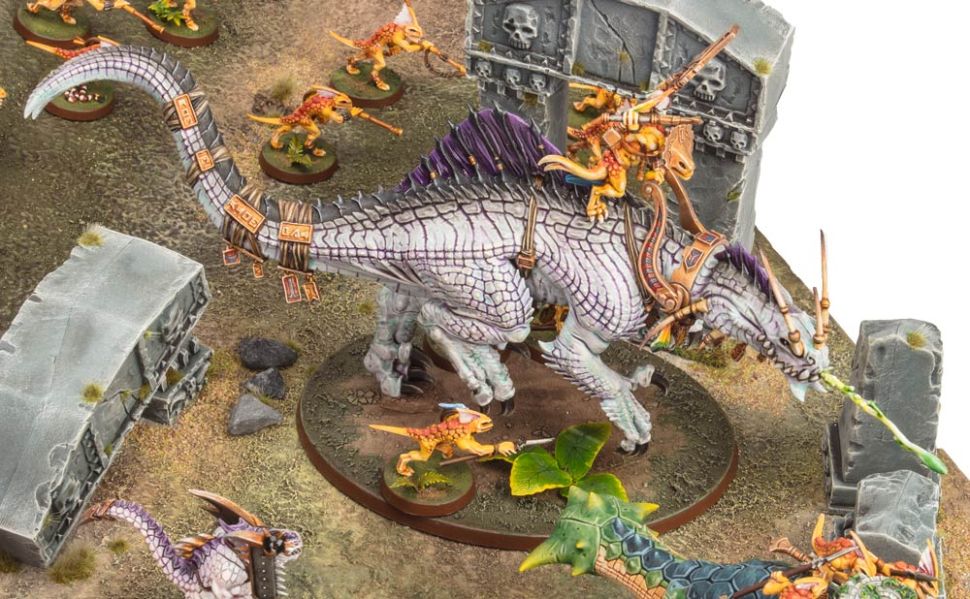 “The trees have a bit of a magical feel to them,” says Mel. “I imagine they probably weren’t there when the Seraphon last passed through the Realmgate. But they’ve been absorbing magic over the centuries, which has warped them a little, hence the more fantastical colouration. To tie in with the stone around the ridge of the board, I painted the stone by the trees the same – Mechanicus Standard Grey, washed with Guilliman Blue, and drybrushed with Screaming Skull.”

Dry Brush at the Ready

“There isn’t an inch of the board that hasn’t been drybrushed,” Mel says. “I used thin, light coats and built the paint up in many layers to give the colours a bit of depth, rather than just using one thick drybrush. My mindset for this board was If you can’t drybrush it, it’s ain’t worth painting.”