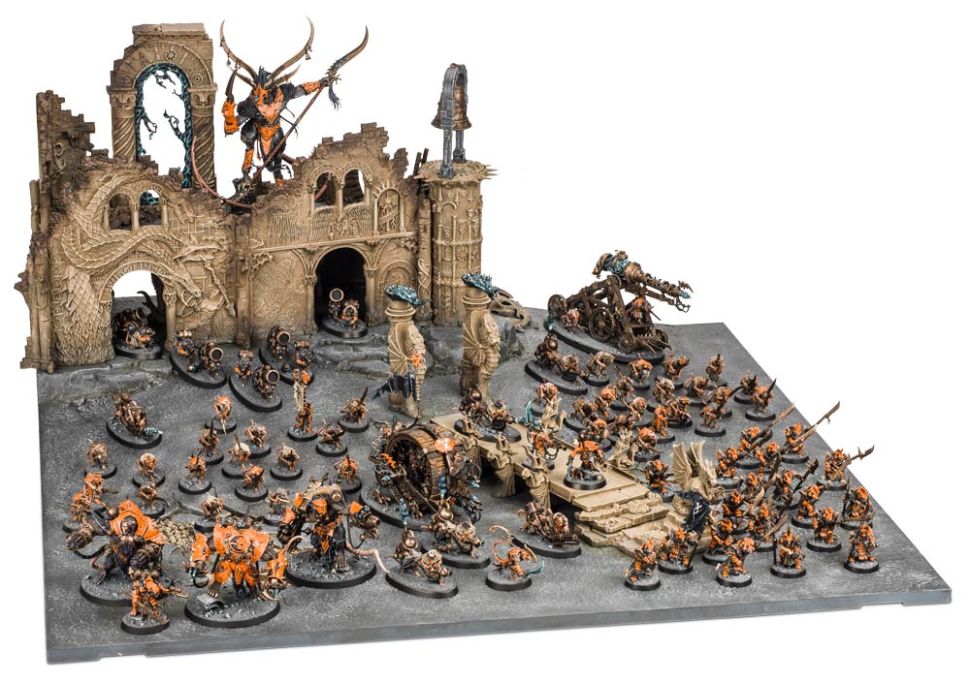 Dan’s Skaven are an eye-catching example of how an unconventional colour scheme can make your army stand out on the tabletop.

Dan has entered Armies on Parade every year since it began back in 2011. Last year, he wanted to paint a new army for Warhammer Age of Sigmar and set his sights on the Skaven, particularly the gun-wielding tech-wizards of the Clans Skryre. “I’ve always been interested in the Skaven,” says Dan, “but I’ve never quite found the inspiration to start an army. My hook came when I was discussing unusual colour schemes for models with a friend. “Like pink Tyranids or orange Skaven?” he said. I think he meant orange fur, not armour, but the idea had settled in my brain and I painted a unit of Clanrats to establish my colour scheme. From that point on I was hooked. I based my army on the Clans Skryre because I love the idea of viciously cunning, man-sized rats with flame-throwers and lightning cannons – it’s apocalyptic fantasy horror and wholly disturbing, which really fits with my interpretation of Warhammer Age of Sigmar. To complement the army, I built a display board for them featuring a ruined citadel, which now features a brass bell to herald Clan Ferrik’s arrival.”

The Doomwheel is one of Dan’s favourite models as he loves running enemy units over with it. Since building it, he’s decided he wants at least five of them so he can make a flying V of Doomwheels*.

The Stormfiends were the last models Dan painted for his army. They’re accompanied by Warlock Engineer Greb, who Dan converted from a Stormvermin model with the addition of the spare gas mask head from the Doomwheel kit.

Dan painted his Skaven using lots of drab greys and browns, which were offset by their orange armour.

Unsurprisingly, the first model Dan painted from his Silver Tower set was the Skaven Deathrunner. Now he needs to paint a second, identical one.

Dan basecoated his Skaven with Mournfang Brown. The armour was then layered using Troll Slayer Orange and Fire Dragon Bright followed by an edge highlight of Lugganath Orange, Dan then mixed Fuegan Orange with ’Ardcoat and applied it to the armour to give it a glossy finish.

*Editor’s Note: If you like Doomwheels, you should take a look at the Doomwheel game by Katsu Entertainment; it’s a blast.

This article was first published in the October 2016 issue of White Dwarf Magazine.  Subscribe to get more brand new hobby content like this each and every month.